Our Zen tradition grew out of the work and teaching of Philip Kapleau Roshi, who trained in Japan for many years before returning to the USA to found Rochester Zen Center.

Sensei Karl Kaliski began his training in Zen in 1997 at the Rochester Zen Center (USA) and became a student of Bodhin Kjolhede Roshi in 1998. He spent a number of years travelling to Rochester for periods of residential training and sesshin, as well as training for many years with Bodhin Roshi's dharma heirs, Roshi Sante Poromaa and Roshi Kanja Odland in Sweden (see below).

He completed his formal koan training in 2013 and was sanctioned as a Zen teacher in 2015. He is an English language teacher and is married with two children.

Sante Poromaa met Philip Kapleau Roshi in the early 1980s and became his student, before continuing his training with Kapleau Roshi's successor Roshi Bodhin Kjolhede. After years of training with these teachers and his ordination as a Zen priest, he finished koan training in 1993 and was authorized to teach by Roshi Kjolhede

Kanja Odland was born in Stockholm in 1963. In 1984 she met Philip Kapleau Roshi and also became a student of Roshi Bodhin Kjolhede. Since the beginning of 1990 she has been co-leader of the Zen Buddhist Society. Kanja Roshi finished her koan training in 1999 and was authorized to teach by Roshi Kjolhede in 2001. 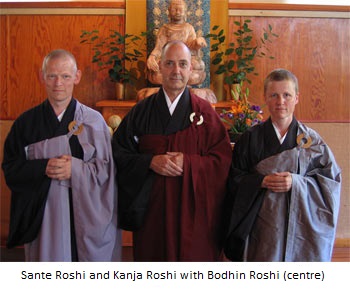 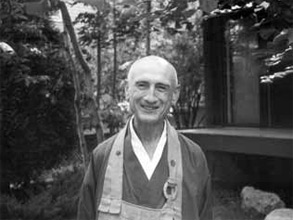 Philip Kapleau Roshi in the gardens of Rochester Zen Center.

Philip Kapleau Roshi in the gardens of Rochester Zen Center.

Roshi Philip Kapleau (1912–2004) is the author of numerous books about Zen including the classic The Three Pillars of Zen.

Philip Kapleau started his spiritual search after his experiences as a court reporter at the Nuremberg trials after the Second World War. He also worked for the International Military Tribunal in Tokyo.

In 1953 he returned to Japan and went through thirteen years of Zen training under two of Japan’s most famous zen masters: Harada Daiun-Roshi (1870-1961) and his Dharma-heir Yasutani-Roshi. Having been ordained by Yasutani-Roshi and authorized to teach, Kapleau returned to USA in 1966 and created the Rochester Zen Center.